Holy wow has it been a while :)

This little blog used to be a flurry of activity.  Ever since Facebook and the birth of Mead Sandidan, though, it's slightly fallen to the wayside.  I think my last post here was in 2014, can you believe it?

Rest assured, though, Sandic's been active- it never fully leaves.  It's got a couple more books in it now, and is somehow (mind-blowingly) going to be part of a conlang documentary, among other things.

The problem with Mead Sandidan is that it doesn't efficiently hold *all kinds* of texts.  Some of the more rambly kind of... you might say "blog"-style entries... ;)  don't fit very well over there.  And for that reason I've decided it's prudent to reboot old Wytn-Awake.

How and if anything'll come of this little jolt of life for our old friend the blog, we'll just have to see in time.  Otawwsa wii awwtesa ia :)


--------------------
(VILANI) Blogda ushaesi, pal feesbuuk uspuutuui, a meer ba 7i kiimi 2016
--------------------"I used to think that this language would be something I'd grow out of- like a snake shedding its skin because it's grown out of it. Not in a callous way at all, cast aside like something unwanted or irrelevant, of course- but my imagining was that it'd be preserved lovingly, looked back on with some perplexedness once the years had gone by- "To think, you know, that I ever used to wear that! How different the times were!"

I imagined that I'd somehow wake up one day and be like other people: able to engage easily with my fellow human beings, having cast aside bitterness and fear. And there have been times that it's waned and gone to sleep, and I think to myself, "Now it begins."


But now, as I get a bit older, and as I go into new places and new experiences again and again, touching catalyst of growth after catalyst of growth, I always come to these places where English is not allowed- where my brain cannot let it go- and so, like a kite that's been flung so far aloft during my times of incubation, I draw the language painstakingly back down to me, stumbling at first, but desperately, sometimes panicked. Is this how a rabbit feels when it's pulled from its warren?

And every single time I left it go far away and then claw blindly to bring it back, there is the amal jeeb ba jae, forgiving, holding out the chance to regain fluency, to put back on the camouflage- filling holes in the smoothness of my outer shell- gently, but needed- like a prosthetic for the limbless: worn, maintained, sometimes detested...

Beautifully, scarredly symptomatic. My love.
Posted by Aaron at 6:38 PM No comments:

A prayer from A Book of Pagan Prayer. I made it into a song!

There were some small alterations made. The rhythm came out rather like "Prayer of White Buffalo Woman", I suppose!

This was from a Facebook post someone shared, but I liked it so much that I translated it.  I can't find the original, so I backtranslated the Sandic into English.


Once upon a time, a farmer's donkey fell down a well.  It cried pitifully for many hours, while the farmer tried to figure out what he ought to do.

But finally the farmer decided that the donkey was not worth it and that the well ought to be covered up anyway because it no longer had any water.

The great effort to save the donkey was simply not worth doing.

He invited all of his neighbors to come help him.  They took shovels and started shoveling dirt into the hole with them.
At first when the donkey realized what was going on, it cried pitifully. But surprisingly the crying stopped.  After some more shoveling, the farmer looked into the well.

He was surprised by what he saw!
Once the dirt hit its back, the donkey would shake it off and step up onto it!

As the neighbors kept shoveling, the donkey kept doing that thing- it stepped up onto it!

After a short while, they were all very surprised when the donkey along the edge of the well and then happily danced away.

Moral of the story:
Life will shovel many things onto you, so many! To save yourself from the well, every trouble is a stair!
Posted by Aaron at 3:48 PM No comments:

Feeling guilty about not updating, so...

So, here you go.  I'm editing antho stories (slowly but surely due to my laptop dying) and haven't had much of anything new (thank god) to add here.

It'll probably be a while before I'm done with it, but that's okay.  I'm going to try and get a sound file of all of the stories, too, so they can be preserved!

Here is a fragment of the story "King of the Crows".

The daughter knew that the bird had spoken the truth, because normal birds do not speak, and evil spirits do not ask favors.

The daughter was (indeed) fearless, and she told the bird that she surely would help it.

"Wait for it here in the castle, O daughter.  While you are sleeping, it will come to you.  If you wish to conquer it, you should not leave from the room in which you will be sleeping, otherwise I will be cursed for eternity."
Posted by Aaron at 7:20 PM No comments:

Four words for our desire - Rumi 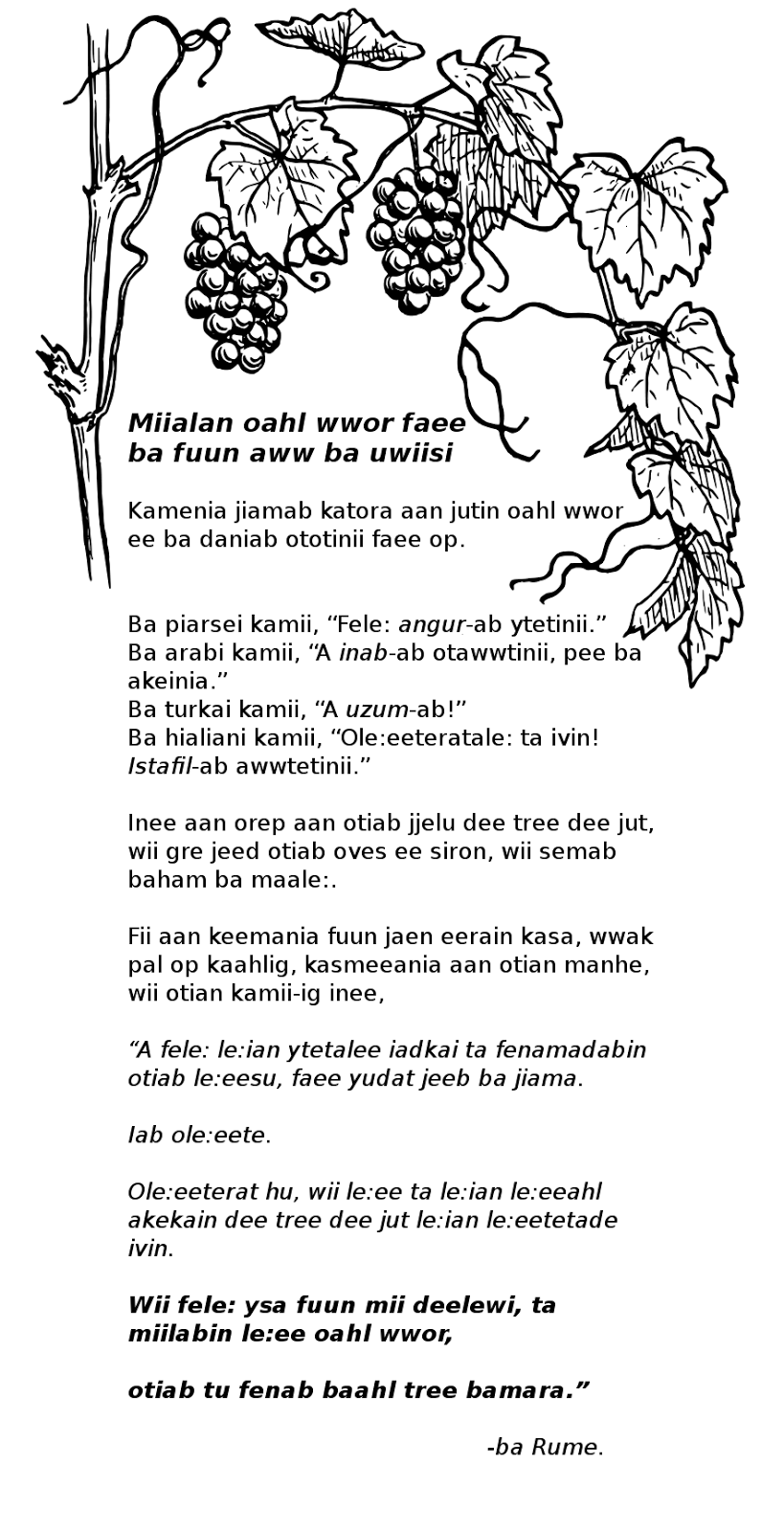 Four words for our desire

A man gave a coin to four people so that they might buy something with it.

The persian said, “I will purchase an angur.”

The greek said, “Shut up, all of you. We will get an istafil.”

Behold, they began to fight amongst themselves, and to punch one another, and this looked to go on without ending.

If a person had been there who knew many languages, he could have calmed them, and said, “But I will sell you the bunch of grapes you are looking for, for the value of that coin.

Be calm, and you who are enemies to one another will agree with each other.

And I know a secret meaning, which makes those four words of yours into one wine.”
Posted by Aaron at 8:13 PM No comments:

A song from my childhood.

silver shining wheel of
radiance
radiance
mother come to us

honored queen of wisdom
hecate
hecate
old one come to us
---

"There used to be a lot of content here! What happened?!"

Don't worry, it's all still in existence and accessible! Due to its not necessarily reflecting the current state of the language because of age and natural changing of Sandic over time due to usage, I've rebooted Wytn Awake and moved the old blog over here!

If you have a link to something that is broken, please just add "old-" in front of it.

This blog will have the same exact character as the old one, just be more modern in language.

This helps people not get confused between older texts and current ones (in the case of learners and those curious who try and pick apart texts).

Plus it was crowded! :p